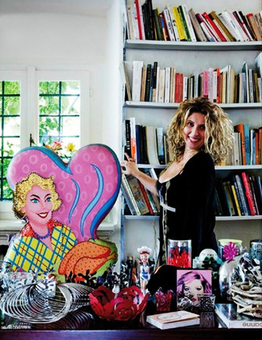 Born in Bergamo, Laura graduated in Art and Communication from DAMS in Bologna, Italy.

She began her career working in the field of contemporary dance, looking after the artistic coordination, costumes and scenery; afterwards she became a researcher at the Domus Academy.

Laura has been the head of the Alessi Study Center (“CSA”) since 1990, acting as meta-project designer and art director. She brought to Alessi the semiological intuition and training she’d acquired from semiologists Eco and Fabbri.

With Laura, Alessi introduced disciplines such as anthropology and semiotics that were, up until then, entirely foreign to its operations, and began the difficult process of extricating itself from the rhetorical swamp in which certain schools of Italian design had become accustomed to wallowing.

The meta-projects she has been involved in for the CSA include the “Family Follow Fiction” collection, the “Creole Memory Container” project and the “Biological” project (leading to the creation of many objects now included in the design collections at the MOMA in New York, the Groninger Museum in Groningen, the MAK in Frankfurt, the Museu d’Arts Decoratives de Barcelona and the Museum Fur Gestaltung in Zurich).

Since 2000 the CSA no longer exists as a physical entity, its identity having transmogrified into a freer, more virtual realm of design research and contact with the world of emerging international design, run by Laura Polinoro as an independent consultant.

Afterwards she set up the Laura Polinoro Workshop, where she organizes workshops with numerous designers, working on a large variety of briefs for different types of businesses, with innovative product design as its goal. The projects that are then put into production are identified by the initials “LPWK”.

Laura regularly meets with the company’s representatives to focus on strategy and positioning. They brainstorm on where the company is and where it wants to go. Carefully listening to the company’s needs, she then creates a meta-project to develop a new product line and enables the company to explore new horizons and ideas.